25,288,977 CUPS DIVERTED FROM LANDFILL
Home Our stories News Two million cups of coffee poured at the Salvos Melbourne Project 614
Back to News

According to Major Nottle, the first step in providing a hand to people experiencing hardship is often starting a conversation over a cup of coffee.

“The Salvation Army wants to make a difference for people doing it tough. Melbourne Project 614 here in Bourke Street came about to serve those who are struggling with homelessness and other challenges in the City of Melbourne. The Magpie Nest Café gives vulnerable people a place to drop in night and day. We sit down over a cuppa and start building a relationship to understand the services we can connect the client with,” Major Nottle said.

“7-Eleven gave us one of their coffee machines in 2014. They saw that by having a machine, it would allow us to spend more time to talking with clients. So they installed the machine, and have been keeping it maintained, and stocked in beans and cups ever since. We’re really excited that 7-Eleven have been able to provide an additional machine, and also a single use cup recycling unit for our Magpie Nest Café. These machines have now poured two million cups of coffee,” he said.

7-Eleven Australia CEO and Managing Director Angus McKay, said the 7-Eleven team was very proud to be able to support The Salvation Army as part of their Good Cause program.

“I’m honoured to be here to show our support the Salvos and the incredible work they do. Homelessness is an issue that we are very aware of and our team wanted to do something to help those they see around the stores. The first coffee machine was an obvious place to start. By providing something we are well set up to support, it gave the Salvos team more time to focus on clients,” Mr McKay said.

“Since then, we’ve become more connected with the Salvos, as well as the work the team do at Melbourne Project 614. Our team volunteer in the café, they donate as part of our workplace giving, and they take part in donation drives. Our city store teams also pick up the phone to let the Salvos outreach teams know there’s someone nearby who might need help,” he said.

Major Nottle says that The Salvation Army and the team at Melbourne Project 614 have a range of ways for people to get involved in their work.

“Whether it’s a financial contribution, a donation in kind, or volunteering to help serve meals or sort donated goods, everything helps. The generosity of the Australian community in helping people doing it tough makes such a difference to people’s lives. Their support truly provides hope to those who need it most,” Major Nottle concluded. 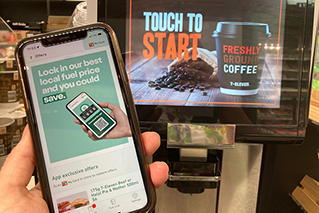